Like his brothers, my Pop was an Army Air Force man, eager to serve his country from the skies. Even before the Japanese infamously attacked Pearl Harbor on December 7th, 1941, Americans patriotically supported their flying men of arms.

Brown & Williamson’s (B&W) “Wings” label – the sample here is copyrighted 1940 but was probably sold in 1941 – features the same “flying wings” my grandfather was proud to earn. He sent those wings back home to his family and kept them all his life. In a nod to the boys training on base and to their families on the home front, B&W emblazoned the pack with the patriotic slogan, “Let’s Go! U.S.A. Keep ‘Em Flying!”

Easily the coolest part of this pack is the aircraft card on the back: a U.S. Army Primary Trainer (it looks like a Fairchild PT-19). The cards were probably meant to be traded among boys much in the way cigarette pack baseball cards were traded earlier in the century.

Unlike airplane “spotter cards,” which would show three separate angles of each plane and were designed to teach people to identify the planes quickly, this card only shows a profile and it’s in color, indicating that it was designed to show off the beautiful aircraft and help sell the cigarettes.

The reverse gives technical information about the plane. The Fairchild PT-19 wasn’t a large or elaborate plane, just right for training a pilot or navigator. Two seats fit the trainer and trainee, and with an open cockpit neither were shielded from the elements or the pressure. Great for learning maneuvers, practicing navigation, and getting used to how an airplane reacts to the controls.

One of my favorite photographs of Pop shows him posing in front of his airplane, which also appears to be a Fairchild PT-19, probably while he was still a baby-faced recruit training as bombardier and gunner in the southern U.S. He’s so handsome in this picture. No wonder my grandmother fell in love with him! 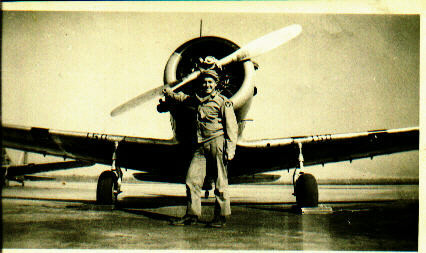 If you’ve got any pictures of yourself or family members posing with these planes, I’d love to post them here!