The end of World War I broke the Austro-Hungarian Empire apart and years of political and economic disarray, culminating in the Anschluss of 1938 that united Austria with Nazi Germany.

But this period also witnessed great cultural growth. Austrian respect for the arts was sufficiently strong for a ground-breaking opera, Jonny Spielt Auf (Jonny Plays), to earn its own cigarette brand, known simply as Jonny. Of course, back when Jonny hit the scenes in 1925-1926, you could probably still smoke in the opera house. Today, most opera-goers have to stand outside the building to smoke, so they’d do better checking out the opera on YouTube.

Czech-Austrian composer Ernst Křenek incorporated Jazz and Blues elements into the score, along with an assortment of mundane sounds like loudspeakers and alarm bells. Not your typical Mozart and Haydn composition – Křenek wanted to infuse Austrian culture with energy from the New World.

Starring in the opera is Jonny, a jazz band fiddler portrayed in blackface (a sign of racist times in the theatre). Robert Everett-Green of the Globe and Mail reports,

The opera’s premise was that Europe was culturally spent, and that only a brusque injection of energy from the New World would revive it. Jonny’s lawless antics – he tries to seduce a white opera singer, steals an Amati violin, and pushes a policeman from a moving car – are treated as refreshing alternatives to the agonized ethical ruminations of the composer Max.

Within a decade, Křenek had fallen out of favor in his homeland, as Hitler’s National Socialist party condemned anything that challenged Aryan supremacy. Nazi propaganda featured him in the Entartete Musik or “degenerate music” on display for vilification in Dusseldorf in 1938. In addition to including jazz music and a black person in his most famous work, he had worked with the Jewish composer Gustav Mahler and even married his daughter Anna.

Nazi rule should have brought an end to the Jonny cigarette brand, as it did to Křenek’s career in Austria (he immigrated to America, where he continued to compose, teach, and write for decades). I don’t know if the brand managed to survive the war, but it enjoyed new life in more recent decades, as did the composer’s reputation. 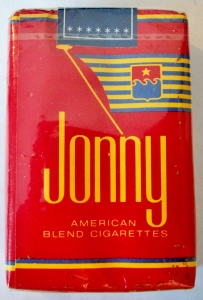 Other than the brand name, the cigarette pack has little connection to the opera – I am at a loss for explaining the flag emblazoned on the cover featuring a golden star rising over a wavy sea (suggestions welcome!). But for someone like me, whose great-uncle (Milton Rothman, the original collector’s step-brother) was murdered in a Nazi death march as a Jewish POW, the brand’s post-war popularity serves as reminder that Hitler ultimately failed in his destructive campaign for racial and cultural purity.

“Immigrants and Exiles.” Traces: We Bring HISTORY to LIFE!. http://www.traces.org/germanimmigrants.html